Brad Pitt has been professionally cool for nigh-on 30 years. It must be exhausting. Not that he’s showing any signs of fatigue, returning to the screen with his most high-profile role in a decade in director Quentin Tarantino’s latest, Once Upon A Time In Hollywood. The film is a wishlist of ’60s and ’70s menswear, but Pitt’s hairstyle also deserves awards nods. A choppy (but smart) mid-length cut, it’s a more retro but also more grown-up version of Timothée Chalamet’s hair – and it got us thinking. Brad Pitt’s best haircuts have always been influential, seemingly defining what men ask their barbers for. Think about the high fade in Fury or Fight Club’s short and choppy cut.

Most of them still work today as well, so we asked top barber, Bradley Smith, creative director at Bradley Smith Hair, how to get them yourself. # #

Brad Pitt has sported a number of long hairstyles over the years, from the erstwhile heartthrob in Legends of the Fall to the tousled warrior in Troy. But it’s this style, from his early appearance in True Romance, that is the most enviable today. It’s grungy and relatively low-maintenance once it’s long enough, but you’ll want at least 12 inches of length up top which should take around a year to grow, with regular trips to the barber to cut down on weight and bulkiness. This won’t work for ramrod straight hair, you need a wave to your mane. Take some of the aforementioned sea salt spray to style and spritz it over towel dried hair, using your fingers to create texture before letting it air dry. Do not blow-dry, unless you want to look like another ’90s icon: namely Jennifer Aniston at peak-Rachel.

We were less bothered about what was in the box during David Fincher’s crime thriller Se7en and more concerned with getting the slick, messy bed head Pitt was sporting. It was a cut seen all over the 2000s, despite the film being made in 1995, an early sign of Pitt’s lasting follicular influence. Smith recommends you leave two inches on the top to create the flick at the front, asking for a scissor point cut for a softer look that still creates all that messy texture you desire, and just one inch on the sides blended into the top.

Then, when you’re getting ready in the morning all you need is a coin-sized amount of clay worked into your hair with your fingers. Push the front back and then forward for the required just-out-of-bed attitude. #

The Devilish Side Parting

Death takes the form of Brad Pitt at his most angelic-looking in Meet Joe Black, beaming down to earth to guide a dying Anthony Hopkins through his last days, all while giving us the 101 on a perfect, Robert Redford-style preppy cut. “I would call this an outgrown side parting,” says Smith, “so ask your barber to scissor cut over a comb for a softer natural look, keeping roughly four inches on top and allowing for the sides to flop back over your ears. Always apply a pre-styling agent such as a sea salt spray which will create the basic shape of the hairstyle whilst adding texture.” If you have thinning hair this style is best avoided. The lack of a strong hairline will only highlight your recession points.

Fight Club was Pitt at his most iconic. The 3D six-pack, the cigarette dangling from lips, the sleazy wardrobe with a borderline-unwearable red leather jacket – every guy in 1999 was after the look, even if the cigarette and LJ aren’t such a good look in the 21st century.

The cherry on top was Pitt’s scruffy crop, a slightly longer version of the more clean-cut textured chop he was wearing in Se7en. Around three inches should be left on top, point cut to create as much texture as possible. “I would then avoid gel and opt for a matte clay or paste to work with your hair’s natural movement,” says Smith. “Less volume more defined texture is what you’re after. Take a pea-sized amount and rub into your hands, making the product more pliable, as you work the product from your crown first and then forward.” And remember, the first rule of messy ’90s Pitt hairstyling is there are no rules, so just go mad on creating as much anti-hero texture as you can. 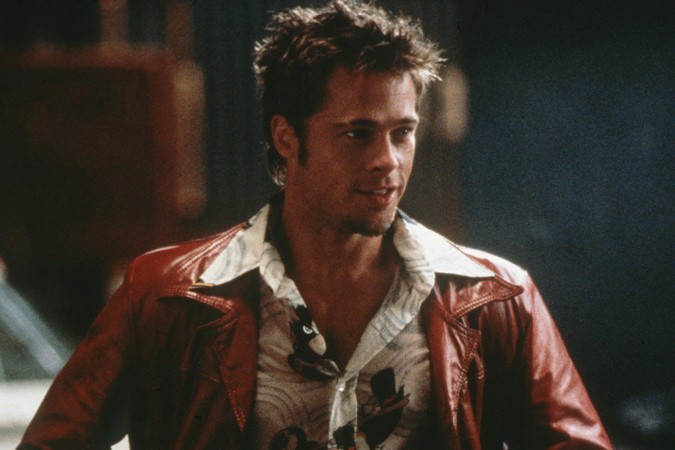 Going toe-to-toe with George Clooney in the style stakes, Pitt won out in Oceans Eleven thanks to a disheveled, devil-may-care do. Once again, it’s all in the point-cutting and that’s exactly what you’ll have to ask the barber to do on top. “Texture is key, but this is a low maintenance cut that is still sharp,” says Smith. “Leave one and a half inches on top and around an inch on the sides. To style, towel dry your hair and apply a fibre cream that will last throughout the day maintaining the hold.” # #

Let’s not get into the whole Jen versus Angie debate, eh? Instead, we’ll focus our attention on the style that attracted Miss Jolie in the first place, an all-over buzz cut, made less aggressive by leaving a smidge more length on top and creating a contrast around the back and sides by using hair clippers set to grade one or two. “Despite the buzz cut being the quintessential low maintenance style, I would still recommend applying a light shine pomade to give your hair a glossy but healthy look in appearance.” 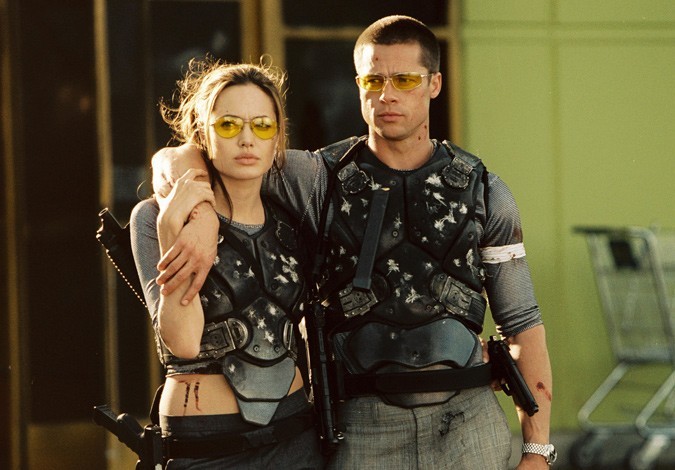 2014 was officially the year of the Brad Pitt Fury haircut, with every man and his dog pleading with their barber to give them the exaggerated undercut Pitt was sporting in the heroic World War II tale. (It’s also a close relative of the wildly popular Peaky Blinders hairstyle). “This is a pompadour with an undercut, exaggerating the contrast between lengths on the top and sides,” says Smith. “To slick back, leave around four inches on top with two inches at the crown. Rather than clippers I would use a razor on the back and sides to create a sharp, shaven finish. “To style, blow-dry your wet hair on a low setting and brush back to create the basic shape of the pompadour. Then leave to air dry the last bit and apply a coin-sized amount of pomade and slick back from your forehead down to your crown. Pomade will have a lasting hold along with a glossy finish.” 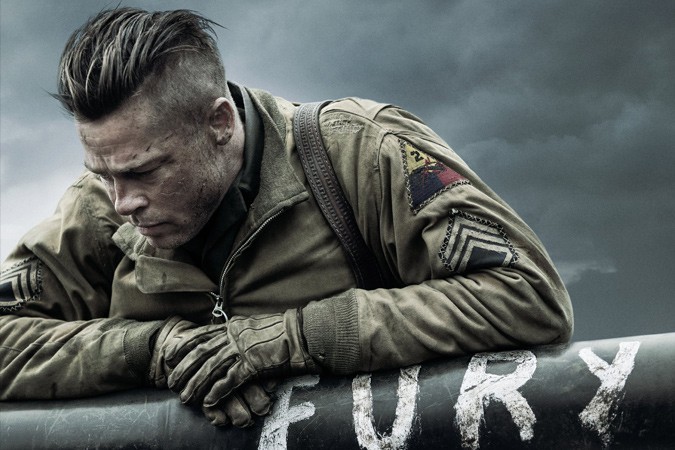 It’s hard to look good when you’re being chased around by zombies for two hours. But besides the accrued bloodstains, Pitt looked relatively unflustered during the running time of World War Z. Could it have been his long, low-maintenance ‘do working overtime? It takes time and a lot of uncomfortable growing out stages for it to look this good with ease though. Thinner hair works best, as hair that is too thick will be hard to part in the middle. Smith then suggests you visit a hairdresser over a barber for the cut as they’ll be more used to working with this length of hair. “You want your hair to fall over your ears and back. Ask the stylist to thin your hair to remove any excess weight which will make your hair easier to style. “Wash your hair less, around twice a week with a natural shampoo, and instead condition daily as this will prevent against hair breakage and retain moisture in your hair. I would also suggest using argan oil as will combat against split ends as well as providing a slight shine.” 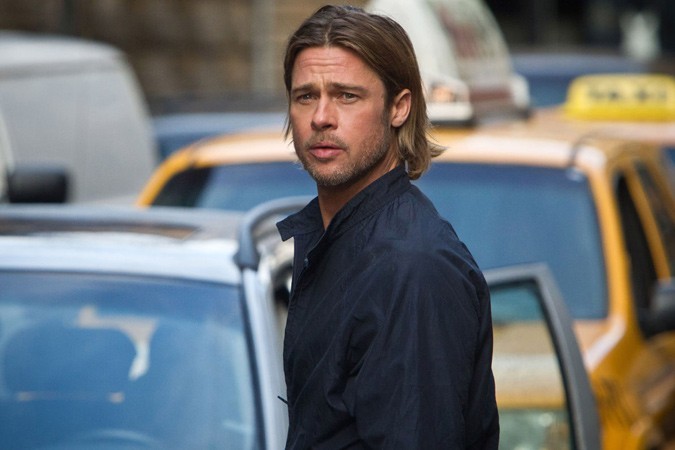 Played with stoic goofiness besides a killer wardrobe and some rock hard abs (seriously impressive when you’re 50-something), Pitt’s Cliff Booth is the best friend to Leonardo DiCaprio’s Rick Dalton, and the one we secretly wish we all had in reality. Another thing we wish we could rock at 55 – besides the abs – was Pitt’s overgrown ’60s side parting. As opposed to the side parting in Meet Joe Black, this cut should be blunt cut according to Smith, following the natural growth of your hair. “Rather than cutting in a parting, let your hair naturally fall. You want plenty of length on top, I would say at least four to five inches, to flick the hair over and part. “Then keep it simple and avoid overusing products – just a sea salt spray left to dry naturally, and for added shape use a dash of forming cream to create definition and hold throughout the day.” 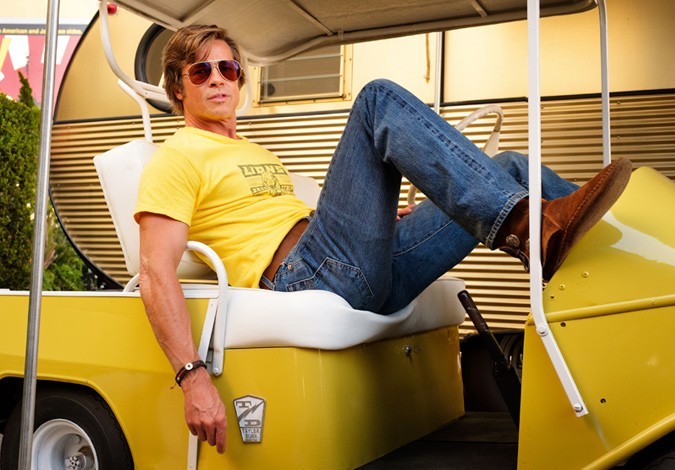